This past week I attended the Rainforest Writers Village with twenty or so other science fiction writers.  The resort where we stayed is on the southeast tip of Lake Quinault, adjacent to the southern border of the Olympic National Park in Washington State.  It was quiet, beautiful, and slow-paced—the perfect place to take a break from everything and focus on my writing.

After lunch the first day, I decided to take a meditation walk along the lakeshore in hopes of absorbing some of the abundant tranquility. When I walked this same path 14 months ago (December 2014), Washington was experiencing a drought. This year, we’d had our wettest winter EVER, and the level of the lake reflected the additional rainfall.  Tree roots normally anchored on the mossy bank now stood in a couple of feet in water.

The first hours of the retreat were graced with several downpours, but for the moment, the rain had stopped. I took deliberate steps along the soggy pathway, carefully placing my feet to avoid adding another fall to my medical file.  I concentrated on taking slow, deep breaths.  Gradually my thoughts came to rest in the moment.  I smelled the surrounding evergreens, felt the moist rainforest air, heard the enthusiastic creek swollen with runoff, saw a raven stepping carefully on puddled lawn.

I meandered past deserted trailer slots and a closed bathhouse to the end of the campground, where stood the World’s Largest Sitka Spruce Tree.  There I encountered a couple of other writers who were also taking a break from their labors.  We imagined the tree was lonely and had called for company.  Eventually, the others wandered off, leaving me alone with the tree, and my thoughts. 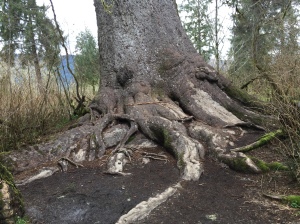 Despite hundreds of droughts and downpours, the thousand-year-old giant before me stood firmly anchored in the earth, continually adding rings to its impressive girth.  The diameter of its trunk exceeded twice my armspan, and the massive roots spread at least twice again as far.

Standing under its broad arms, dwarfed by its great size and age, I was struck by … Read more