The holiday season can be difficult for cancer patients and their loved ones. It’s tough to be merry while dealing with treatment side effects or wondering whether one will be alive this time next year.
By the end of November this year, I’d hit a low point. My energy had waned, oppressed by the shorter days and gray skies of Seattle and a general sense of ill health. My cough had increased, stirring fears of recurrence. My writing muse had burned out after weeks of intensive Lung Cancer Awareness Month activities.

Then, within one week, two lung cancer buddies died, and a third friend died of metastatic breast cancer days after being diagnosed. I kept vigil with her family as her lungs failed from obstructive pneumonia–a scenario that was far too familiar. The shadow of my own Ghost of Christmas Future loomed, and holiday lights did nothing to brighten it.

In a rare moment of prescience last summer, my family had planned the perfect remedy for me … read more on my Cure Today blog 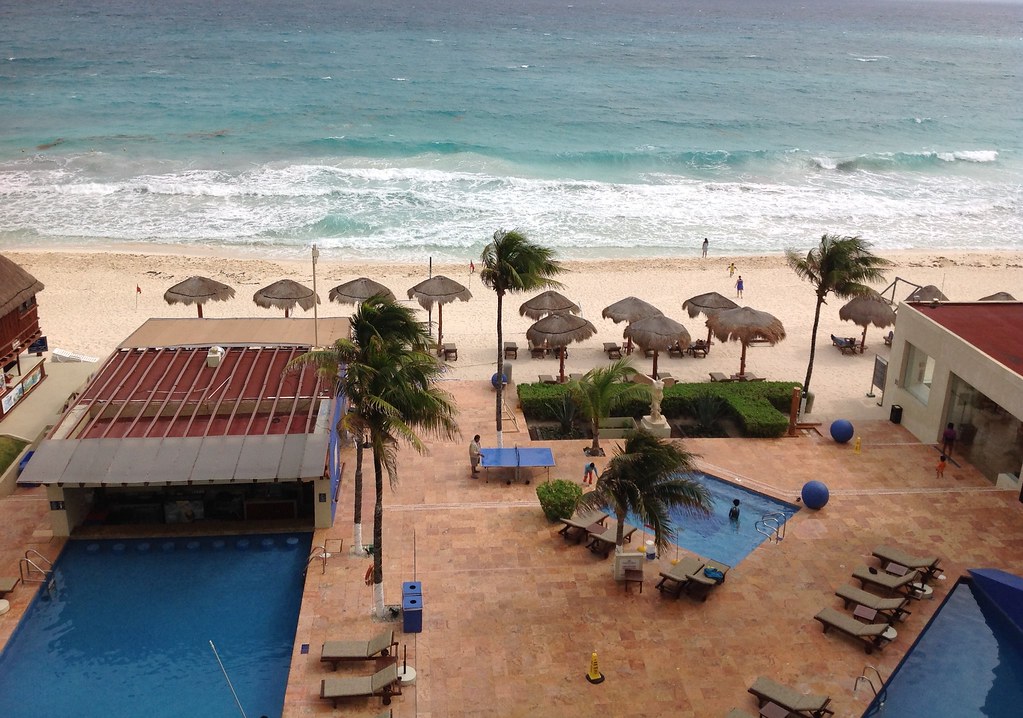 JFD20141220-CancunClubRegina by Janet Freeman-Daily is licensed under a Creative Commons Attribution-ShareAlike 4.0 International License.

When I first heard my lung cancer diagnosis in May 2011, one of my gut reactions was, “How do I tell my kid?”

I had better reasons than most cancer patients to be wary of telling my adopted son about my diagnosis. Yes, 25-year-old David was on the autism spectrum, which among other things meant he had issues with processing auditory inputs, deciphering the meaning of communications, working memory, and interpreting emotions. However, a more daunting challenge for him was personal history: his birthmother (my cousin) had died of brain cancer when he was three, and her eldest brother had died of the same cancer in late 2009.

How do you tell someone he might lose a second mother to cancer?

I hesitated to say anything to David before the diagnostic process and staging were complete. Struggling with my own emotions and denial, I felt I had to be able to solidify my perspective before I could present my situation in a hopeful manner to anyone else. For days I fretted about how to approach this task. Even when I was hospitalized with obstructive pneumonia immediately after my diagnostic mediastinoscopy surgery, I still said nothing about cancer to David. I told myself I didn’t want to disrupt his spring quarter finals.

The truth was, I still didn’t know what to say.

Once David was done with his school quarter, however, he could not avoid seeing me around the house in clear discomfort, or seeing Dad flush the PICC line in my left arm every night. I doubted even his generally internal focus could miss recognizing that something was wrong with me.

Finally, my husband Gerry and I asked David to join us in the living room for a family discussion. I feared that would trigger anxiety for him, because such meetings rarely happened in our house, but he seemed calm. I fought to stay tear-free while talking.

“David,” I said, “I have lung cancer. It’s aggressive, and advanced, but the doctors think it’s curable. I’m currently on antibiotics for pneumonia caused by the cancer. When I’m recovered from the pneumonia, I’ll start chemo and radiation, which is considered aggressive cancer treatment.”

I watched his reaction carefully. David quietly shifted in his chair while I talked, and scanned various points in the room — his standard conversational behavior. So far so good.

Gerry spoke next. “We want to be honest and open with you about this. We won’t lie to you. Do you have any questions?”

He did ask some general questions. We answered each one truthfully, but briefly. He sat silently for a minute, then seemed to reach some sort of decision.

He looked at the ceiling, then back at the floor.

“I’m OK. Besides, I already know how to find new parents.”

I burst out laughing. He looked at me and flashed that charming grin. He was, indeed, OK.

Today, over two years later, I asked David what he remembered of that day. I was hoping for confirmation of my memory and interpretation of events. I was surprised to learn that David only remembered he was disappointed.

Apparently David had tried to communicate something that day, and I didn’t get it right. He wanted me to use a recognizable phrase as a code word if my cancer took a turn for the worse. The phrase he chose was, “It’s a trap!” I got the science fiction reference — it was spoken by Admiral Ackbar in “Star Wars VI: Return of the Jedi,” when the heroic rebels were hit with a surprise attack by the evil Empire — but I didn’t capture the proper inflection. I now have an assignment to rewatch the movie so I can practice Admiral Ackbar’s pronouncement properly. “It’s a TRAP!”

It’s good to have goals in life. And a kid who can surprise me.