‪Thanks to cancer clinical trials,  engaged patients, and a devoted spouse, I have lived to see my silver wedding anniversary.

I don’t know which is more amazing – that I’ve lived six years beyond a diagnosis of advanced lung cancer (and currently have no evidence disease), or that two strong-willed, opinionated engineers have shared a house for 25 years without killing each other.  I think the second might be a rarer occurrence.

My cancer diagnosis definitely put a strain on our marriage, and I know Gerry struggled at times as he watched me experience the discomforts, losses, dashed hopes, and side effects of living with lung cancer as a chronic illness. Oddly, cancer has also strengthened our marriage.  It has caused both of us to focus more on what’s really important, to be more tolerant of each other’s idiosyncrasies (we got a lot), and to find more ways to spend time together.

My husband has gradually become more involved in supporting my patient advocacy work. He’s met people that I have helped, and he can see the purpose and meaning it gives me. He said he wanted to help me have that in my life. (sniff sniff) Appropriately, hubby and I going to celebrate our 25th anniversary at the ASCO Annual Meeting in Chicago this weekend. He’ll be escorting me to events since I’ll still using a knee scooter after foot surgery (isn’t he sweet?). We’re hoping he’ll be able to watch me give my first-ever ASCO presentation, despite having only a guest badge.

So, happy anniversary, Gerry.  Thanks for sticking with me for better or worse. Love you! 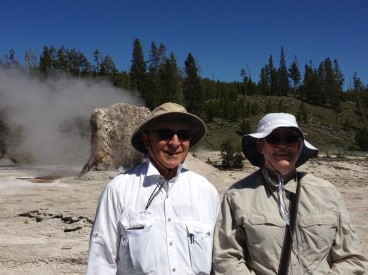 Gerry and Janet blowing off steam in Yellowstone, 2013.

P.S. I’m not a TOTAL nerd. We will also be celebrating our anniversary with a Mediterranean cruise in the fall.  See, there are really cool historical sites in Rome, Athens, and Israel …